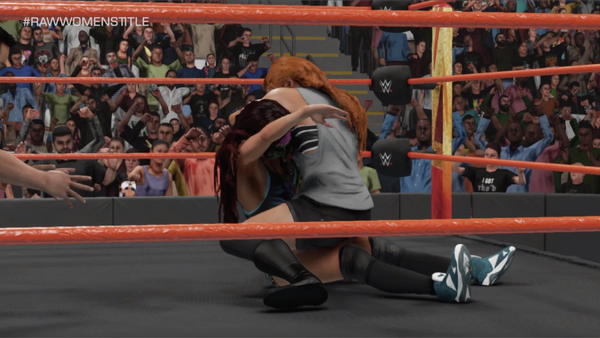 The betting odds were clearly against "The Princess of Staten Island", who unexpectedly won the battle royal to earn a shot at Becky Lynch's RAW Women's Championship.

Both women entered the arena with the intent of proving who should be the top woman on Team Red, with both exchanging their best moves as well as fighting all over the arena and due to the No Disqualification stat apart of the Submissions ONLY stipulation, both women used kendo sticks as well as a table to get the advantage over the other and the match eventually made it's way back into the middle of the ring where Carmella shocked the world where she used Becky's arsenal against her (first with the Kimura Lock outside the ring early on). After powering out of the Dis-Arm-Her (used by Carmella), Lynch used some underhanded tactics when she spat green mist into the face of the challenger before locking in the Kimura Lock for the submission victory.

Lynch has proven that she is the best that RAW has to offer and now she has her focus solely on becoming the Undisputed WWE Women's Champion at Summerslam.

It's the match you never thought you'd see, Becky Lynch will defend her RAW Women's Title in a Submission Match against "The Princess of Staten Island" Carmella in what is dubbed "The One Sided Affair".

Ever since winning the RAW Women's Championship from Sasha Banks, "The Irish Lass Kicker" has displayed a different side of her, intentionally injuring her opponents like Natalya and even Ember Moon at King of the Ring. With the announcement that both the RAW and Smackdown Women's Titles will be unified at Summerslam, Becky is focused on proving that she's "The Man" but she has one last obstacle to overcome if she wants to make it to Brooklyn

On RAW Episode 55, 6 of RAW's top competitors competed in a Battle Royal with the winner advancing to London to challenge the champion for one of RAW's top prizes and it came down to Carmella and Nikki Bella, two women who have serious history with each other. In a shocking turn, it was "The Princess" who eliminated "The Fearless" to win the Battle Royal. But Carmella's celebration was short lived when "Becky Balboa" confronted her challenge and it was announced that this contest will be a Submission Match, in many people's eyes that favors the champion. Carmella did not back down but would soon regret it when the champ struck with the title belt across the skull before locking in a modified Kimura Lock, giving "The Princess" a taste of what's to come at Judgment Day

Retrieved from "https://greshdigigames.fandom.com/wiki/Becky_Lynch_def._Carmella_(Judgment_Day_2017)?oldid=7964"
Community content is available under CC-BY-SA unless otherwise noted.